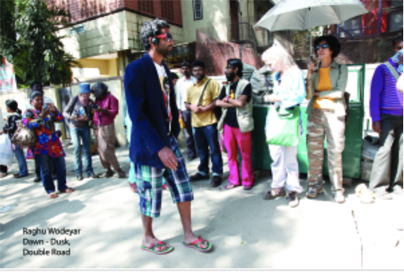 TAKE precipitated a longtime dream to connect the stories and knowledge of artists, art historians, critics, curators, gallerists and administrators, without distinction, while evolving a language for art writing that could establish camaraderie between these various wheels that propel the arts forward. It eventually took form and took off into the art world’s orbit in 2009 with the mission to infuse conversation and discourse on the arts into the phantasmagoric shell that the boom had turned art into. TAKE was committed to being a platform for its readers and writers—far apart as they might be physically—to come together in the simultaneity of its pages. I wanted the journal to not just be the end result of the efforts of its contributors, but also be the friend and the mentor that I had sought while starting out—a witness and participant to coffee table discussions, tea stall banter and the wine and cheese of the white cube—in the formal, more accessible mode of a publication."

Phantom Lady (PL): Smitha, the LIVE ART 2011 Bangalore International Performance Festival you organized recently for Bar1 was so ambitious in scale and thoughtful in conception, I have never seen anything like it. It was part public performances, part workshop and part seminar, with experienced international artists, young artists and students. We spent two weeks together and became a community. I found an unusual intimacy, openness, experimentation and
spontaneity with a lot of discussion and analysis. Can you talk Can you talk about how it came about?

Smitha Cariappa (SC): Performance is like dope, you get hooked on to it! It started with my being a part of BAR1, the Bangalore Artist Residency 1. We decided to stop our residency programme in November last year and work on projects.  I have been thinking for a while that it was very important to document and archive performance and to encourage students and performance art studies, and the best way was to organize an international platform. You know that Bangalore has also been a city where theatre and performing arts has had a long history but the people here have not really understood performance art.

As an artist organizing the event, I wanted it to be informal and intimate, and my target was the students and upcoming artists. It had to make a change to the approach to performance art in the city.  I invited artists who had made a big difference in their own cities, like Dorothea Rust who created the Dawn to Dusk performance in Zurich and Tamar Raban who is really responsible for the performance art seen in Israel by creating the Performance Art Platform (PAP) in Tel Aviv. I had met Bandu Manamperi and Janani Cooray at the Theertha Residency in Colombo. Janani who works on critiquing the concept of “Beauty” was so constrained in Colombo, but she was very relaxed and almost giggly here. I think it’s very male-dominated in Colombo but she found so many women artists in LIVE ART. I wanted her to meet Mangala because they are so similar in some ways, and finally they did a performance together here. ...