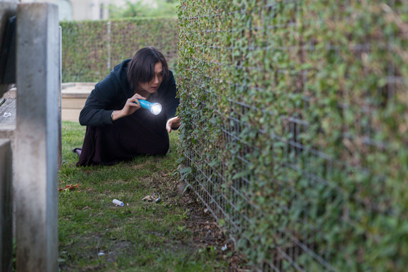 Performance art doesn’t need to confine itself to festivals or an institutional context, it creates its own space accepting and engaging the viewer. ‘THE LONGEST DAY’ performance successfully proved it. Irene Müller and Dorothea Rust, curators of THE LONGEST DAY elaborate.

Saturday, June 21, 2014: The longest day of this year started at 05.29 and ended at 21.26. From sunrise to sunset a 16 hour performance marathon took place in Zeughaushof, Zurich. Sixteen artists and artist groups from India and Myanmar, Chile, Switzerland and France were invited to show their performative works. The performance site was marked with a low circular wooden platform connecting the asphalt forecourt of the Kunstraum Walcheturm with green. Each artist had a time slot of one hour and all performances started without announcement. Site and time slot were the only specifications for the artists who made their own artistic decisions without any thematic framework. This polyphonic decision-making gave the project its specific character and presence. THE LONGEST DAY – a successful history of performance events in public spaces in Switzerland THE LONGEST DAY was founded in 2004 by Dorothea Rust (artist, cultural theoretician and dancer) and Peter Emch (artist, professor Zurich University of the Arts ZHdK).

All former editions of THE LONGEST DAY took place between 2004 and 2008 in the Kunsthof Zurich, a small courtyard in the direct neighbourhood of the Zurich University of the Arts. They attracted a large audience and met with a positive response inside Switzerland. Today Irene Müller (art historian, curator and author) and Dorothea Rust are forming the platform DER LÄNGSTE TAG and are responsible for all curatorial issues, organisation and realization of the event. Until now THE LONGEST DAY is a unique and successful format in the cultural landscape of Swiss Performance art and related art practices such as dance or movement, sound and musical performances, installations, theatrical manifestations as well as spoken-word or interactive approaches.